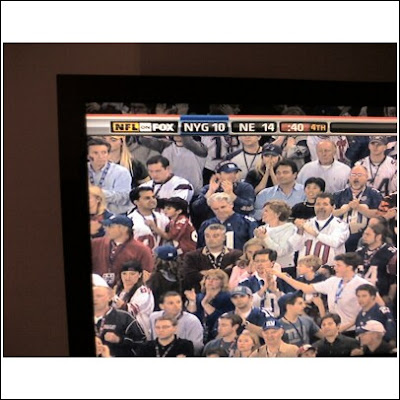 Thank you Ricky, for once again stirring that pot of Puerto Rican witchcraft and bringing to light a moment in CB Super Bowl history that will live on forever and ever, to be passed on to the future generation of CB and so on.  Better than anything the Giants did on that special Sunday, two CBs beat the odds against a crowd of 75,000 plus when they appeared, for approximately 1 full second, on national television during the live broadcast of Super Duper Bowl XLII.
At 00:40 of the 4th quarter, after Eli converts a 3rd and 11 pass to Smith, the camera flashes up on the crowd.  In the video, Jose is smiling, cheering, and clapping, and I am clapping yet swaying (like I usually do in the 4th quarter of a football game).  In this pic, it looks like I am taking a piss on the guy in front of me.  Enjoy the snapshot (I'm underneath "FOX" and Jose is to my left).
-Vincent LaGuardia Gambini
Section 125, Row 25, Seat 22
Posted by Gambini at 11:30 AM 1 comment:

I love me some Weng Weng

This 2 foot 9 Filipino tough man was kickin ass in films such as D' Wild Wild Weng, Chopsuey Met Big Time Papa and For Y'ur Height Only throughout the 70's and 80's known as Agent 00. He's listed in the Guinness World Records as the shortest adult actor in a leading role.
This is gold. Solid fuggin Gold.

You see me, you see CB